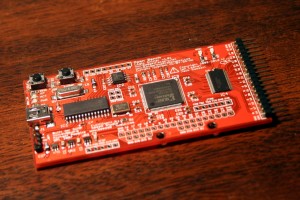 Way back in 2010, I came across the Open Bench Logic Sniffer (OLS) from Dangerous Prototypes. Being in the market for an inexpensive, capable logic sniffer that I can use with open-source GNU/Linux tools, and being a sucker for red circuit boards, I snapped one right up. Three years later, I finally got it working.

My initial experience with the device revealed three major problems:

Complicating matters is the fact that the online documentation is disorganized and confusing. I still can’t figure out the relationship between Dangerous Prototypes and Gadget Factory… So after sitting unused in my toolbox for three years, I decided to give it another go. Since I first bought the OLS, the original SUMP client has been supplanted by the unimaginatively-named Logic Sniffer client. While still a little buggy, it is easier to use and has more features than the SUMP client. So that pretty much takes care of problem (1). Problem (2) is what I primarily set out to address. The device I bought is hardware version 1.01. Current models are version 1.04. More importantly, the firmware running on the PIC and the FPGA bitstream have advanced considerably. I’m not sure which firmware/FPGA versions shipped with my device, but I know that the firmware was pre-1.0 and the FPGA was running the original SUMP core. As of this writing, the latest firmware is version 3.0 and the latest bitstream is Demon core 3.07. It took a lot of digging though webpages and forums, but I finally managed to get new code loaded. Here’s how.

This entry on microtherion’s blog is an excellent resource for anyone else trying to untangle the confusing mess of information on the OLS, and was a tremendous help for my own work.