For the last several months, my low beam headlights on my embattled 2007 WRX have been on the fritz. I checked both, and neither bulb was burned out. Upon further investigation, I discovered that the plastic connector that connects to the right bulb had almost entirely disintegrated, presumably due to high heat in the engine compartment (it is a turbocharged car, after all). Why high-temperature ceramic connectors are not standard factory equipment escapes me, but the current one clearly needed replacing. I took the car to the local Subaru dealer, and I was told that they would have to install a new wiring harness for $250 + labor. I’m no gear head, but I’m pretty sure I can do better than that. To hell with those guys.

I went to AutoZone (or some equivalent) and picked up a set of H7 replacement connectors for about $3 each. There was only about an inch of free wire coming out of the headlamp assembly, so it would have been impractical to try and solder a new connector with it still attached to the car body. After some digging on Google, I came across this indispensable guide to extricating the headlight assembly from it’s home in the Suby’s nose. It took a good bit of wiggling and pulling, but it eventually came out. Then, it was a fairly simple matter of cleaving the old connector, stripping the wires, and soldering the new one in place.

I put everything back together (it was no easier to replace the assembly than to remove it), re-installed the car battery, and- crap- now the other headlight is out. Fortunately, the connector looks fine, but the bulb is burned out. Easy fix. But hey- a three dollar part and a Saturday’s labor beats dropping a few bills at the dealership. Success! 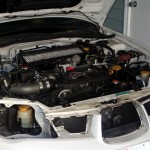 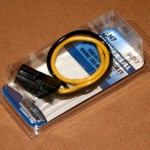 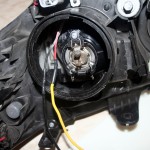